Six pack abs are one of those trademark muscles, the ones even kids know about, abs, pecs and biceps.

If we believe what we are told, they are the main aesthetic attribute that women look for in a man, and as a consequence, are one of the most sought after prizes for male gym-goers. Ever since an entire generation of celebrities took the stigma right out of female muscularity, more of the fairer sex are also chasing shredded, washboard abdominals. Making this one of the few training guides that applies equally to both the guys and gals! 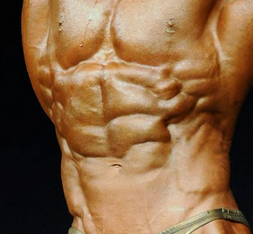 The exercises outlined here are not designed to give you a great all round mid-section or a smaller waistline, that is detailed elsewhere on this blog. The exercises here are the ones giving you in-your-face abs of Himalayan standards. These are the movements to perform in the gym for a thick six pack.

There are two main aspects to attaining eye-popping six-pack abs. The first is muscular development and definition. You need to target the six pack muscles, the rectus abdominis. Hit them hard to thicken them and accentuate the peaks and troughs. You also need to strip fat away so your super ripped abs can be seen.

So, first a note on fat burning and then we’ll move on to some anatomy.

You can’t effectively spot-reduce fat. The main factor in where your body fat is located comes from your genetics. Some people carry fat around their thighs and still have ripped abs, some have the opposite. This diversity is one of the beautiful things about being human, you must learn to embrace your body type. That said, if you cut your body fat percentage low enough, abs pop out.

Now, intensity. There are so many different ideas flying around the internet lately about what training intensity is best to burn fat. Well, sorry to all those hardcore advocates of high-intensity fat burning, it’s just not scientifically possible. While you may burn some fat while smashing yourself through an hour of circuit training, it isn’t the best way. Low intensity is the way forward. Anywhere between 40 and 70% of your maximum working heart rate should help to burn fat as your primary fuel, with 55-65% being optimal. Consistency is the key. Cycling is possibly the best form of cardio for fat burning, simply because it is the easiest to regulate.

The reason for this low-intensity zone being best for fat burning and revealing those six pack abs is simple. Of all the fuels your body can use, fat is the hardest to break down and convert into usable energy. Fat molecules are large and complex substrates, so your body needs a little breathing room to deal with them and feed them into the energy cycles. If you work at too high an intensity, your body won’t process the fats fast enough and will instead turn to sugars and other more simple fuels. It’s that simple. One exception to this rule is endurance athletes, who have trained their bodies to keep on trucking and have honed their fat metabolism to a higher intensity level.

Proper doses of Sheer Strength Labs Thermogenic Fat Burners will speed up the rate your abs develop and slim. The mix of hand picked, top quality ingredients will up your metabolism and make your abs pop. 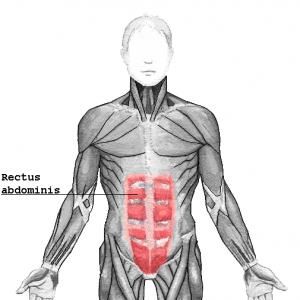 The muscles that form six-pack abs are the rectus abdominis, a pair of muscles that run straight down the abdomen, separated by the central linea alba tissue. The rectus abdominis originates at the crest of the pubis, the front, central part of the pelvis, before inserting at the lower ribs and sternum. Depending largely on genetics, you may have either a four, six, or even an eight pack.

The main function of this muscle group is to give flexion to the lumbar spine, a job that is directly opposed by the erector spinae, the primary muscle involved in deadlifting. The other important use of the rectus abdominis muscles is to contract the abdomen when forcefully exhaling.

The main job of the six pack is to flex the lumbar spine. It takes no expert to know that describes an abdominal crunch, so what better place to start.

Everybody has heard of the crunch. Way back when the Fresh Prince was getting in fights back in Philly, the crunch overtook the good old standard sit-up as the number one six pack builder. This still stands. Put simply, the crunch works the rectus abdominis through its range of motion, perfectly.

But, are you doing it right? And do you know of all of the effective variations?

The standard crunch starts with you lying on your back, with your knees bent. You can place your hands on your temples, or lay them across your chest to make it easier. Holding your arms stretched out behind your head will make the crunch harder. You can also hold a disc or dumbbell to go harder still. Now, you want to roll your head, shoulders, and upper back off the floor, doing it through ab contractions only. Don’t just jerk upwards, feel your abs contract. Hold at the top for a second, before lowering yourself back to the start position. Feel your abs burn all the way down. Now, without relieving tension, crunch upwards again. Don’t use momentum. Simply bobbing up and down will do very little to concentrate good quality work into the six pack area.

A variation, which is pictured here, is the cross body crunch. This works the abs from a slightly different angle, and also puts some work into the obliques. Lift as normal but diagonally towards your opposite knee. Lift your knee and touch your elbow on it before lowering. Don’t reach out for the knee, use your abs to get there. You can alternate these or do a set per side.

Another excellent variation is to use an exercise ball. If you lay back on the ball with your feet on the ground, you can hyperextend your back, giving the abs a better stretch.

Cable crunches are a great way to add large resistance to the exercise and thicken up your six pack. Add the double rope attachment to a high cable stack, and kneel in front of it. Pull the ropes either side of your head. Now crunch towards the floor as if you were doing a normal crunch. You should only be moving from the waist upwards. Ab crunch machines are also excellent for thickening the abs.

Take Sheer Strength Alpha Testosterone Boosters to get a ripped six pack. Raising testosterone levels will not only add more muscle to your abs, it will also strip body fat.

Knee raises are great for strengthening and toning the lower abs, but when performed through their fullest range of motion, they hit the six pack. Hanging knee raises are not as good for this, due to the unavoidable swinging that creeps in. The best form of knee raises are done using a ‘Captain’s chair,’ a station with a back and armrests so you can hold yourself in position. Begin with your legs straight and lift your knees sharply, using your abs. Instead of stopping when your thighs are parallel with the floor, keep lifting them higher while squeezing your six pack. Hold at the top for a second before lowering slowly and sadistically. 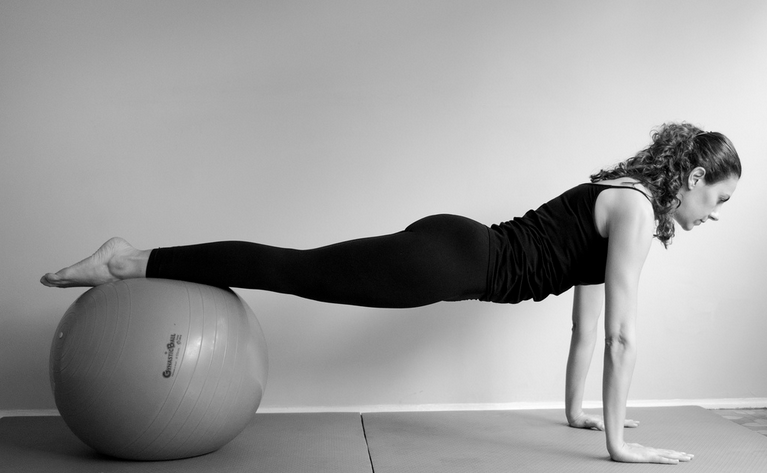 The plank pike is not a well-known exercise. It is essentially a Pilates move and is a tricky one to master. There is a specialist piece of equipment, called a pilates reformer, which is a sliding platform, and is perfect for performing the plank pike. However, it is unlikely your gym has one of these. The best way to perform the plank pike is using an exercise ball, and beginning in the position below.

From this position, you must roll the ball towards yourself, while pushing your butt into the air, and keeping your legs and back flat. The finishing position should resemble something like the picture below. 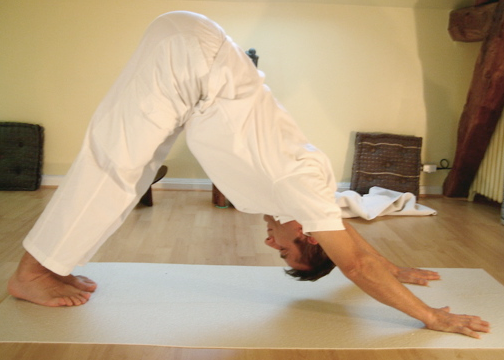 This may take some time to master, but the benefits will make it worth the effort. The plank pike, like the standard plank, works the entire core area. The difference with the pike version is that it concentrates effort into the six pack. Lift steadily, feeling the squeeze in the abs, hold at the top, then lower back to the start position. If your core is strong enough, you can rest in the standard plank position before going for another set. 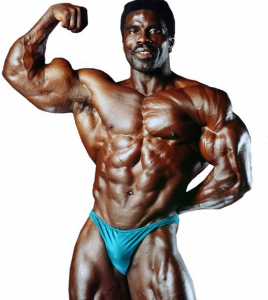 Sheer Strength Labs have created a range of top quality products to help you get shredded while adding slabs of thick, strong muscle.

Start using Sheer Strength Pre-Workout Powder. Give yourself and metabolism a shift to reveal those six-pack abs.