Genius New Bench Just Put Your Spotter Out of a Job

The bench press is a gym standard move everyone should have in their routine, in some form. It’s the ultimate test of upper body strength. Activating many muscle groups, and is one of the best mass building lifts. But it has just one flaw; safety. 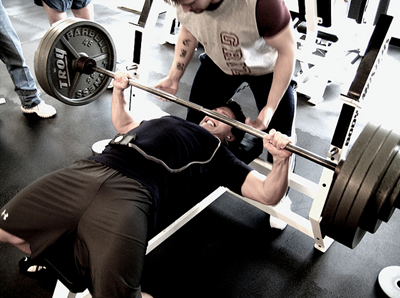 All other big lifts come with an escape route. In the squat rack, you can slide in the stoppers and drop out from under the bar. When deadlifting, you just let go. If you have stacks of weight on the bar for shoulder presses, you have the option of throwing that thing away. When it comes to the mighty barbell bench press, it’s you or the bar. You must wage a war against gravity, or that thing is coming down to crush you against the bench.

Everybody has scared themselves at some point. If you haven’t, you probably aren’t pushing yourself hard enough. It’s a rite of passage, a part of educating yourself in the ways of iron, and a major step in learning to respect the equipment. It also helps you understand how rapidly a muscle can fail.

Getting stuck under a heavy bar is a seriously frightening situation, especially if the bar rolls toward your neck. If it happens to you once, you sure as hell won’t want it to happen again. It is a definite wake up call. It’s estimated that dozens of people around the world, die each year after becoming stuck under a bar while performing the bench press. Many, many more manage to roll the weight off, often resulting in broken ribs and collarbones, as well as concussions and muscle tears. With the popularity of 24-hour gyms, especially those that are unstaffed for up to 12 hours of the day, bench pressing injuries are becoming far more common.

So, What Can You Currently Do to Bench Press Safely, Alone?

When it comes down to it, there is no substitute for a spotter. A good spotter can take the bar when you hit failure, and they can push you beyond failure by only providing the assistance you need to complete the lift.

But, What Is the BEST Way to Safely Bench Huge Weights on Your Own?

Well, we may now have the answer to this in the form of the Maxx Bench. The Maxx Bench is the brainchild of Dave Vorozilchak and his inventor pal, Jim, and it is a revolutionary piece of kit likely to be a worldwide phenomenon. Though at the Kickstarter stage, pre-orders for the Maxx Bench are through the roof. Past engineering involved stopping the weight or raising it away from the lifter, but the Maxx Bench drops the bench away from the bar. Check out the video below and see what you think.

We won’t ask you if you’re impressed. All of this is pretty awesome.

This is a genius idea reducing serious injuries allowing the user to train alone, and without needing a spotter. Taking Sheer Alpha Testosterone Booster from Sheer Strength Labs helps you amp up the intensity. Introduce it into your gameplan and routine. The potent mix of testosterone compounds sets up a heavily anabolic environment for big gains in strength and muscle – the results you want to see. Make that reality happen today.

Now, in case anybody missed the point in that video, the Maxx Bench approaches the issue of bench press safety in a slightly different way than other previous attempts to solve the problem. While others have toyed with the principle of continuing to lift the weight until muscular failure, the Maxx Bench works by dropping the bench and the lifter away to safety. Then the bar comes to rest on a set of stoppers. 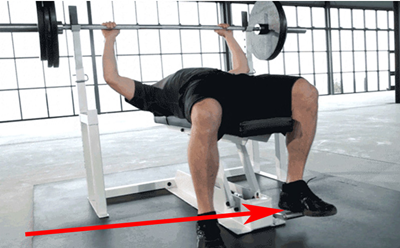 This mechanism is initiated by the only body part the lifter has free, the feet. By simply pressing a foot lever when failure is reached, the bench folds smoothly down to a lower height allowing for a safe exit. As soon as the lifter gets up, the bench smoothly rises back into a usable position. This smooth ride is achieved with a system of joints and hydraulics tucked beneath the bench. This hydraulic system allows the bench height to be adjusted.

So, Could This Be the Future?

Very possibly. As long as the mechanism stands the test of time, this could become a regular feature in many gyms. One type of establishment looking at the addition of a Maxx Bench to their collection are the 24-hour gyms. These gyms are often unmanned for many hours during the night, leaving a huge window for potentially nasty accidents. Adding a Maxx Bench could alleviate these concerns, or….. it could encourage people to push themselves way beyond their capabilities. That lever looks nice and big, but if you decide to go for a really stupid PB at 4 am with nobody around, you drop that weight, and it lands on your chest. You can’t move it one inch…. can you guarantee you can find that lever in your blind panic?

Probably. That’s just overthinking it now. You can’t nanny everybody. Survival of the fittest and all that, eh. What this comes down to is a genius invention making bench presses safer for everyone. The big question here is, why hasn’t anybody thought of this before? It seems so simple! But then many of the best inventions are. The one weakness of this design is it looks like an incline option won’t be possible. The only way an incline could be built in would be if the bench flattened out when the lever is pressed. Otherwise, it is doubtful the user would drop far enough to clear the bar. However, this could be achievable by adding adjustable stops. But that’s just getting picky now.

So, What Does This Mean for Your 4 Am Chest Workout? What Could You Do Differently With the Maxx Bench? 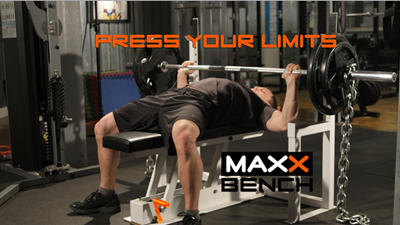 The obvious answer is you can go heavier. You can push yourself into the lower rep range without having to worry about getting stuck. You can go for the mythical 5×5 without a spotter. You can also include that last rep, the one where you’re debating whether to go for it or not, because you’re not sure you can lift it up again. You could even go for a PB if you want, but it’s not recommended. Remember, whatever you fail on, you have to get back up off of the stops. That means stripping the bar down and lifting it up.

With the Maxx Bench, you can perform negative reps on your own, to failure. When that bar hits your chest and stays there, simply kick the lever and rest. You can go for pause reps. Lower the weight, and instead of springing it back using elastic – the momentum in your pecs and triceps – hold it an inch above your chest for a second, then power it back. Again, if you fail, just push the lever.

While nothing beats a spotter regarding safety and going beyond failure, the Maxx Bench looks like a useful addition to the gym, especially for those who train at odd hours. After you’ve finished blasting your chest to failure, have a smooth, refreshing drink of Sheer Recovery from Sheer Strength Labs. This excellent post-workout supplement gives muscles a kick start toward growth and recovery.

The post Genius New Bench Just Put Your Spotter Out of a Job appeared first on .