We spend most of our lives fighting gravity. In the gym we rely on gravity to provide the vast majority of the resistance that we go on to turn into strength and muscle. But gravity is not all good. Gravity can be a real pain. It’s time to take the fight to the biggest beast of all! 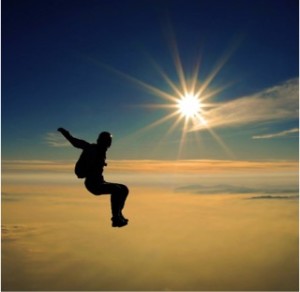 Gravity is described as a universal force, creating attraction between all matter.

It has also been described as….

Gravity has ALSO been described as the invisible thing that makes stuff go towards other stuff.

It is the force that allows us to reap the rewards of picking up heavy objects.

It is the downward force that keeps us on the ground. Without it, your house would be filled with flying protein powder… in fact you wouldn’t have a house, and you certainly wouldn’t be able to train at the gym. Gravity even has the power to bend light, space, and time… but that’s a level of mind overload that we need not get into.

All joking aside, gravity is pretty important for bodybuilding and strength training. On Earth, gravity causes objects to accelerate towards the planet at 9.8 meters per second squared. It is the force that gives objects weight. It is the love of your life and the bane of your existence all rolled into one.

Give yourself a lift before every gruelling, gravity defying workout. Add Sheer Pre-X to your pre-workout supplement and nutrition intake to send your energy levels soaring. Packed with superb ingredients such as caffeine, taurine, and citrulline this potent supplement will have you raring to go.

So gravity is great for weight training, right?

During the big lifts, such as deadlifts, squats, and bench presses where the weight is being moved in a straight line through the vertical plane, gravity is in its element. You are quite simply pushing upwards against the unseen forces of the universe. Muscle will follow.

But that’s quite enough of talking up the invisible opponent. It may shock you to learn that it’s not all it’s cracked up to be. There are many, many incidences in the gym where gravity is far from your friend. Any free weight exercise that involves moving through an arc is inefficient, partly ineffective, and even slightly nonsensical for this reason. Such exercises don’t give you the gains that you deserve and expect.

Take the lateral raise for example. This is the ultimate example of an inefficient arc. Stand in the start position with a dumbbell in each hand. Gently start the movement. How far do you have to move the weights before you feel any real tension at all? You can move through a good third of the raise before feeling any muscle tension. That’s one third of the contraction of the muscle wasted on nothing but a sideways swing through the air. That’s one third of the potential gains thrown away, literally in the blink of the eye.

So… What you gonna do about it? 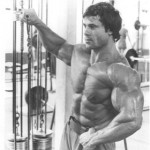 Yeah, yeah, yeah… Everyone’s heard the old school lifters shouting about how cables are no good and free weights are the only way to build quality muscle.

This simply makes no sense.

Cable machines are just free weights attached to a cable with a massively versatile range of adjustable settings at the end of it.

But back to gravity.

What cables offer is constant tension. This is because the weight stack moves up and down, through the vertical plane, meaning that whatever your hands do, the resistance is unaffected by gravity. Consider the lateral raise.

Stand side on to or slightly facing the cable stack. Set the pivot to the lowest position, choose a good sturdy handle with a swivel grip, and assume the start position for one-armed laterals.

Start to move the weight… Aaah, instant tension. There’s no slack section to the lift now. The delts are engaged right from the very first millimeter and this tension will remain, unchanged, right to the very top of the lift.

Granted, cable lifts can take some getting used to. It does feel different. But this isn’t a bad thing. Embrace it and reap the rewards of a greater range of motion.

Other lifts that are excellent, and even indispensable when converted to their cable form are:

Cables can really get the blood flowing, leading to amazing, skin-splitting pumps. Up the ante further by adding a nitric oxide booster to your pre-workout nutrition. Sheer N.O. is engineered to get the maximum amount of fuel filled blood deep into the tissues. Containing two forms of the potent NO booster, arginine, as well as citrulline malate, the science is there to back this beauty up. 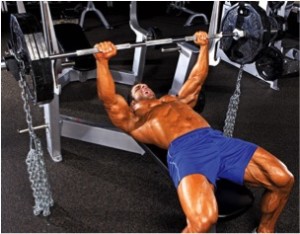 Movements through the vertical plane are great and harness the full potential of gravity. But the problem is that gravity is a constant.

The amount of muscle tissue engaged is indirectly proportionate to the difficulty of the lift. That is, the more muscle you are using, the easier it is to fight gravity. This is why lifts become easier as you near the top of the movement. What a cop out! Let’s keep the pressure on and give gravity what for. Let’s get some grunt going! Tackle gravity head on!

Chains and resistance bands are excellent ways to improve the dynamics of your lifts, especially the big three, the exercises that give the greatest returns. If you’re unfamiliar with the concept, the idea is to add more resistance as the lift progresses. That is, to increase the load as more muscle tissue is engaged, making the top of the lift just as tough as the bottom. No more easy rides!

When attaching chains, the bulk of the mass should be on the ground at the start of the movement (see bench press pic above). The bunches should get bigger as they fall down, but remember to get it equal on each side!

Like cable movements, and probably more so, bands and chains take some getting used to, but the rewards are definitely worth it. You won’t want to use them all of the time, but two or three good sets per workout using various rep ranges are a great way to challenge yourself and hit parts of the muscles that would normally get an easier time of it.

So now we’ve found ways to improve the way gravity affects our training, and we’ve looked at methods to fully harness its power. Now it’s time to really push the fight forwards.

Most lifters know of the benefits of negative reps, and use them in some form in their workouts. The negative, or eccentric portion of the lift is just as important as the positive, or concentric part. Don’t just let gravity take the weight back to the start position. Fight it all the way. Generally speaking, you should take around double the time to lower the weight than you took to lift it. Always control the weight back to the start, feeling the muscles stretch and burn.

You can go way further with negatives, but this is something you shouldn’t overdo, or you risk some serious DOMS! Forced negatives involved lifting the weight by some other means (a partner or using both hands for example) before lowering the weight as slowly as possible. Take a look at this video for an idea. 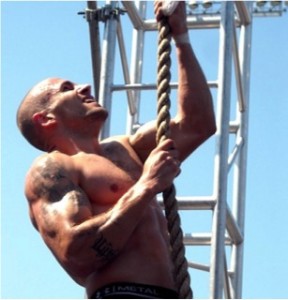 When was the last time you climbed a rope? Rope climbing is HARD.

It’s also an excellent way to work your entire body and tie all of those individually trained elements together to boost strength and power.

Climbing ropes is superb for grip, which is in turn great for arm strength and wrist and elbow stability. It’s the ultimate way to defy gravity and mix up your workouts. Give it a go.

Rope climbing is seriously tough, and it’s just the sort of intense activity that will naturally send your testosterone levels through the roof. The math is simple: more T equals more muscle and strength. Push your natural levels even higher with Sheer Test. Containing a multitude of respected testosterone-boosting ingredients including zinc, longjack, and D-aspartic acid, Sheer Test will boost your levels, resulting in increases in strength, muscle mass, and motivation, as well as improved sleep.

Don’t let gravity have it all its own way! Stand up and fight! Fight the most powerful force in the universe. Tackle it head on and reach new levels of strength, fitness, and development.

The post Gravity: What You Gonna Do About It? appeared first on .

Functional Smoothies That Won’t Just Give You a Sugar Rush

Smoothie (pl. smoothies) A person, usually a man, who is slick and sure of themselves. Slang. Derogatory A thick drink based on pureed fruit Smoothies (of the latter variety) have gained popularity in recent years, especially in (but not limited to) health and fitness circles. They are seen as the ultimate in liquid food an...