The shoulders are one of the most important muscle groups in any bodybuilder or physique athlete’s cannon. They are solely responsible for adding width to the frame, subsequently being vitally important in the battle for the highly sought after V-shape. 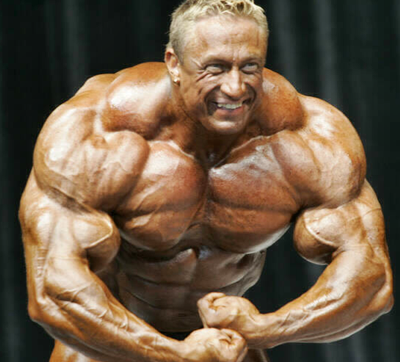 But people often forget just how sophisticated the tissues of this area of the body are. The three deltoid heads surround the shoulder complex, a name not to be taken lightly. The aptly named complex is comprised of many bones, both small and large, as well as plenty of smaller muscles, tendons and ligaments susceptible to injury from both acute stress and repeated strain.

The shoulders are involved in some way in most exercises performed in the gym, from bench press to bicep curls. For this reason, many people’s shoulders don’t require a huge volume of work to grow. Instead, the main ingredients of a shoulder workout should include focused form, the mind-muscle connection, variation, and intensity. In fact, many lifters find the front and rear delts are hit so hard on chest and back days, respectively, they simply tag them onto the end of that particular day’s training.

A great way to develop the mind-muscle connection and increase workout intensity is to take a nitric oxide boosting supplement. Sheer NO2 contains highly potent ingredients that cause a markedly increased blood flow to the target muscles. Get ready for some huge pumps!

Now, variation. It’s always good to mix up your training and keep the muscles guessing. At the core of your shoulder workouts should be the main shoulder builders, the overhead presses, but you also need to hit the deltoid heads from all angles and ensure you protect and strengthen the underlying structures.

Here are some great exercises that you probably don’t do in your shoulder training, and some you may not have heard of before:

As previously mentioned, many people find chest days all but ruin their front delts. It’s not uncommon to experience serious DOMS in this small area in the days following a big bench press session. If you then train the front delts separately on shoulder day, they are getting blasted twice per week, not to mention the stability work they do during most other workouts. This amounts to over-training. If you think this is a problem, the best way to conquer the problem is to add a few sets of frontal delt exercises at the end of chest day.

To build a fully developed chest, you must include at least one inclined exercise, with the incline bench press being the most common. This places even more stress on the frontal portion of the shoulders. So why not lift that bench even higher, just past 45 degrees if possible and finish on a high note. Keeping the shoulders and elbows back causes the bar or dumbbells (up to you, but dumbbells offer a greater range of motion) to be much higher on the chest, heaping pressure on the target muscles. Finishing chest day with some front raises will see your frontal deltoid heads done for the week. 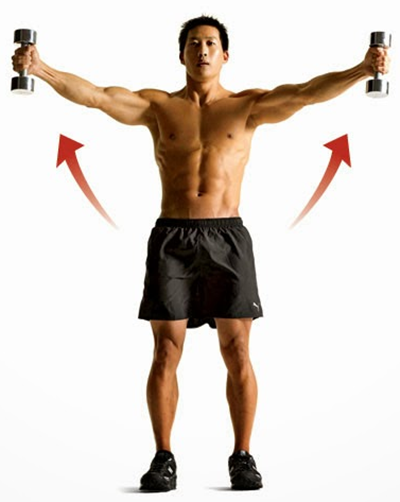 A common phrase to hear in gyms is something like “It’s all about pressing, forget all those silly isolation movements.” This is simply not correct. Pressing, while admittedly the best all round shoulder builder, is not a natural movement for the human body. It also places huge strain on the underlying shoulder complex, as well as the tendons and other tissues at the elbow.

That doesn’t mean you should quit overhead pressing, it MUST remain at the core of your shoulder workouts, but you must also perform isolation movements to create rounded shoulder caps and actually strengthen the joint beneath. Scaptions are a great exercise for doing just that.

Dumbbell scaptions lie somewhere between a front raise and the lateral variety, with a grip perpendicular to the ground. Begin with your hands hanging naturally by your side, then raise the dumbbells as pictured, making sure you keep the shoulder complex still and don’t shrug. This exercise hits the front and lateral heads, as well as adding strength and stability to the deeper tissues, especially the often-injured rotator cuff.

The standard dumbbell lateral raise has a huge dead spot at the bottom due to gravity, leading to the temptation to use greater weights and momentum to complete the lift. The lower portion of the lift also places a great strain on the small, delicate muscles surrounding the rotator cuff. Performing the leaning dumbbell lateral raise eliminates this problem area, and although it doesn’t do away with the effects of gravity, it does place the lateral head under pressure, sooner. Simply grab a dumbbell and find a sturdy upright to hold onto while planting your feet at the base of the upright and leaning out to arm’s length. Now complete the lift  concentrating on both phases.

Bent Laterals with an Offset Grip

This is a simple adaptation of the standard bent dumbbell lateral raise. Instead of holding the weights in the center, grip them towards the rear of the handles. This slight shift in position places increased work on the rear delts, resulting in a more effective lift. Squeeze at the top and lower in a controlled manner to really blast these small muscles.

After a big workout, you need proper nutrition and rest to recover and grow. Sheer Sleep actually contains melatonin, the hormone predominantly responsible for proper sleeping patterns, as well as many other great ingredients. 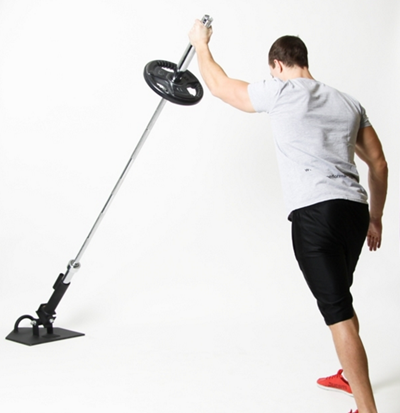 Most well-equipped gyms possess a landmine set up, or, at least, a T-bar row setup that might be useful for this exercise.

The landmine press allows the shoulders to work through a more natural range of motion, builds power as well as strength, and is popular among athletes such as football players.

Assume a strong stance, leaning into the apparatus and launch the weight skywards. Using your legs a little won’t hurt.

Side to Side Landmine Press

This is an excellent variation of the above exercise working both shoulders. Again, adopt a strong stance, grab the bar with two hands, beginning at one shoulder. Thrust upwards to the center-line, then lower to the opposite side and repeat. This is a great exercise for those who suffer pain from standard shoulder press exercises due to the natural arc of the movement.

Everyone’s heard of the triceps kickback exercise. Well, this simple adaptation shifts the work to the rear delts, but from a different angle than most other rear delt exercises. A cable setup is best for this exercise as it eliminates the dead spot at the bottom of the movement. Lean over to almost parallel with the floor, and instead of fixing the upper arm and kicking back from the elbow, as with the triceps version, straighten your arm and pivot from the shoulder. A rope is the best grip to use for this, but if your cable machine has a rubber ball as a stopper, just remove all handles and grip that.

Shoulder to Shoulder Press With a Kettlebell

Kettlebells have been around for hundreds of years, but they have only recently become standard equipment in most gyms. While they don’t offer the muscle building capacity of standard free weights, they are highly versatile when used correctly.

The kettlebell shoulder to shoulder press is very similar to the landmine variety, albeit in a slightly different and freer plane of motion. Grasp the body of the bell with the handle tipped back towards you and your thumbs wrapped around it. Starting at one shoulder, press up to the center-line, then lower to the opposite side and repeat. See the video for an example.

The shoulder muscles contain more testosterone receptors than almost any other area of the body. Performing your workouts with high intensity will naturally boost your body’s production of this essential and potent anabolic hormone. Adding a testosterone boosting supplement amplifies this effect, leading to increased recovery and growth. Sheer Alpha is a powerful testosterone booster, packed with potent ingredients to send your testosterone levels through the roof. As well as improved results, you can also expect an increase in energy and drive, as well as improved sleep. Add it to your supplement stack today.

The post Great Shoulder Exercises You Probably Don’t Do appeared first on .